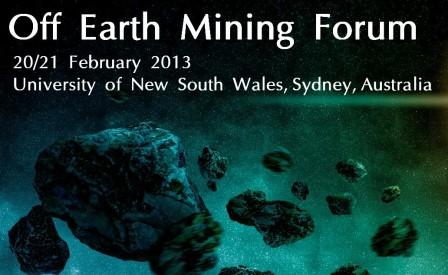 As history has repeatedly shown, where there are valuable minerals to be unearthed, adventurous humans will arrive in droves - even if it means battling extreme conditions and risking life and limb. So what will happen when the next great "gold rush" in our history is quite literally out of this world? And what kind of technology would be needed for the mining?

Business analysts may poke fun at the "impossibly" expensive cost of mining nearby celestial bodies such as asteroids, or even the moon, but these pursuits are not beyond the realm of possibility. Returning to the moon for the purposes of mining will require new technologies and new ways of thinking, and this extends to the conventional business model. We cannot write these pursuits off based on high cost alone, especially given the hidden treasures to be found. Demand for "rare-earth" minerals (which are used in a range of technologies) is rising sharply, but their supply is extremely limited.

While most people have never heard the exotic names Yttrium, Lanthanum, and Samarium, these rare-earths are increasingly critical in the making of high-tech products with both civilian and military applications. Technologies ranging from tablets to missiles to wind turbines all require these valuable minerals, all of which are available in abundance on the moon. Helium-3 (He-3), a non-radioactive nuclear fusion fuel, considered by some to be the safe energy source of the future, is also abundant on the moon. It is presently available on Earth but costs approximately A$5,000 per litre and the energy required for extraction and processing exceeds the energy that can be gained from the fusion reactor.

In other words, it's not economically viable. But easy access to more plentiful reserves will change this equation. While each of these minerals alone might not provide a viable return-on-investment (ROI) their unique distribution on the lunar surface creates the opportunity to "split-the-cost". In other words, if designed properly, many rare-earth minerals and He-3 could be mined with the same equipment, at the same location using the same "Earth-to-Moon" shuttle - a commercial vehicle that could ferry materials back down to Earth.

The race is on to mine the moon - and UNSW researchers have figured out how to do it and how to build there.