A study of the health and lifestyles of Australian centenarians 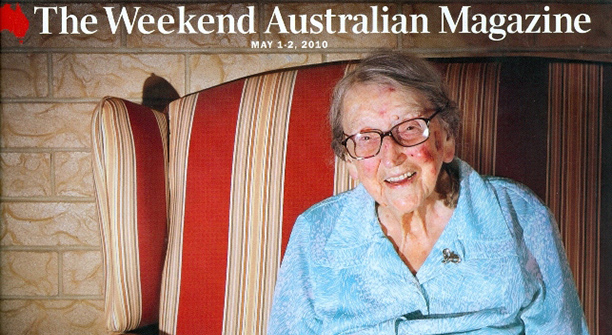 Robyn Richmond initiated research examining the predictors of positive ageing and the study team included Dr Frances Kay-Lambkin (University of Newcastle and National Drug and Alcohol Research Centre, University of New South Wales).  The UNSW Australian Centenarian Study comprises interviews with 190 centenarians on their health and lifestyles and was conducted in these Australia states: NSW, Victoria, Queensland, ACT and South Australia. The study of centenarian health reported data on social and cultural factors and reported a low prevalence of cardiovascular risk factors, moderate prevalence of dementia and other diseases, and genetic factors associated with extreme longevity such as longevity running in families. Lifestyle factors over the lifespan consisted of low smoking, maintenance of their weight, moderate alcohol use, moderate physical activity and stress relieving activities. Centenarians had an optimistic and resilient personality. This was the first study in Australia to investigate the health and lifestyles of extremely old people.

The research team is led by Professor Perminder Sachdev (Prince of Wales Hospital), and includes Professor Richmond and Professor Henry Brodarty (Prince of Wales Hospital).  This research collaboration with leading neuro-psychiatrists at Prince of Wales Hospital is a study of cognitive and neuroimaging research of exceptionally old individuals and is called the Sydney Centenarian Study. Over 300 people aged 95+ and including centenarians are participating in this NHMRC funded study with follow-up assessments at six monthly intervals underway at 6, 12 and 24 months. The primary focus is on the ageing brain, and neurocognitive disorders, genetic factors associated with ageing and socio-cultural and lifestyle factors.

"The world is witnessing a demographic shift towards an ageing of the population - Australians over the age of 90 are now the fastest growing proportion of the population. Today we have an estimated 3,000 centenarians in Australia and that number is likely to reach 50,000 by 2050," says UNSW Scientia Professor Perminder Sachdev.

In 2010, the Sydney Centenarian Study research team organised the first Australasian conference on centenarians - Living to 100: The Science and the Art. The conference was opened by the Federal Minister for Ageing, Mark Butler, and brought together leading researchers from Australia and the United States. The Keynote speaker was Prof Leonard Poon, leader of the Georgia Centenarian Study and internationally renowned for his work in this field, who shared his experiences of more than 20 years of research in the field. Symposia topics included genetics, nutrition, risk factors, cognition and the brains of the very old, and community impact of extreme longevity. UNSW researchers presented an update on Australia's most comprehensive ongoing surveys of centenarians. An article describing the conference can be found on page 12 in the UNSW Uniken newsletter, 2010.

"These exceptional individuals may hold many secrets to longevity, and this conference brought together leading researchers to discuss the knowledge gained so far," Professor Sachdev says.