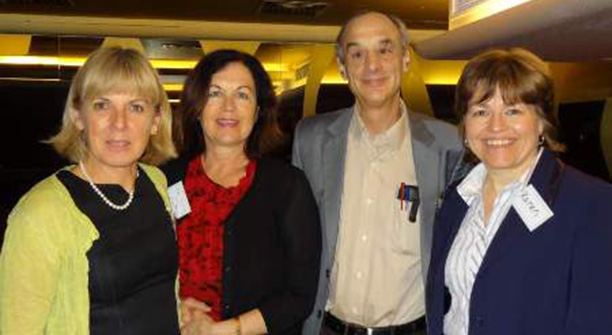 As a consequence of her research in general practice, Robyn Richmond was invited as Australia’s representative to join the International Union Against Tobacco and Lung Disease (IUATLD). The IUATLD is a non-profit non-government voluntary organisation founded in 1920 that has a focus on low-income countries.  A major activity of the IUATLD is education, and the dissemination of knowledge of lung disease to health care professionals, decision-makers and the general public.  From 1991-1999 Robyn Richmond was Australia’s representative as a member of the Tobacco Prevention Section (TPS) of the IUALTD, and in 1994, she was elected Deputy Chair of the TPS for 3 years, and then Chair for a further 3 years, serving in executive positions for 6 years.  There are >5000 members of the IUATLD and almost 400 members in the Tobacco Prevention Section.  The TPS of the IUATLD identified as one of its programs of work the issue of determining the extent of teaching about tobacco in medical schools around the world and encouraging teaching through medical curricula. Worldwide surveys provided valuable data on the extent of teaching about tobacco in medical schools, and a training program was developed where Robyn Richmond trained professors and academics in medical schools in the tobacco curriculum she had developed for teaching medical and nursing students about tobacco.

For over two decades Robyn Richmond trained academics in medical schools across 15 countries in her tobacco curricula and worked in joint partnerships with them to adapt her teaching manual and student resources for use in their own countries. Her tobacco curricula manual has been translated into French, Spanish, Italian, Romanian, Mandarin, Japanese, Turkish, Malaysian, Laotian and Farsi, and has been implemented in medical schools in China, Turkey, France, Cambodia, Germany, Iran, Laos, the Arab Gulf states, Italy, Romania, Japan and Spain.

Service to education of health professionals

Training health professionals in smoking cessation in Australia: doctors, nurses and pharmacists
Robyn Richmond’s Smokescreen smoking cessation program translation was developed as a part of her research but was translated into use in general practice as a service to health professionals and to public health. The program continued to be refined and developed as a result of evaluations in practice among general practitioners.
Training and evaluation of its effectiveness among general practitioners
Robyn Richmond and her colleagues, Professor Nicholas Zwar and Associate Professor Colin Mendelsohn trained around 11,000 GPs across Australia in the Smokescreen smoking cessation intervention. Training in workshops commenced nationally in 1986 and was carried out predominantly on a voluntary basis during evenings or on weekends.
Robyn Richmond evaluated utilisation of the smoking treatment program among 198 GPs and found that 88% of GPs who had been trained in her Smokescreen smoking cessation program were using it six months following their training workshop. This percent extrapolates to 9,680 of the 11,000 GPs trained in the Smokescreen cessation treatment program who continued to use the intervention program with their smoking patients. This would have been almost half of the 20,000 GPs working in Australia in 1991 at the time the study was conducted (GP Workforce Statistics: 1984-85 to 2013-14), who were using her smoking cessation treatment program at least 6 months after training.
Among the general population, 80% of people visit their GP at least once a year, and smokers usually visit their GP more than once.  In 1990 over 3.5 million Australians were smokers, and 2.8 million of these smokers would have visited their GP at least once during the year. Since almost half of all GPs (9,680) would have been using the Smokescreen smoking cessation program with their patients on a regular basis, it can be surmised that around 1.4 million smokers would have been assisted to quit smoking as a result of visiting a GP trained in Robyn Richmond’s Smokescreen team. This reveals the significant public health impact of her work among GPs to reduce smoking among patients. Further, this also demonstrated that GPs can play an important role in assisting smokers to quit and resulted in a systemic shift in the practice of general practitioners.
Training nurses
The training program Robyn Richmond developed for GPs to use with smoking patients was translated for other health professionals such as practice nurses.  Over the past 15 years and ongoing, she has trained nurses in evidence based smoking cessation interventions. Working with co-investigator Professor Nicholas Zwar, now Executive Dean, Health Sciences & Medicine, Bond University, their latest venture is to train practice nurses working in general practice to deliver brief smoking advice.
Training pharmacists
Based on the national training program implemented among general practitioners, a program was launched in May 2000 as a quitting event for World No Tobacco Day.  This was the Smokescreen for Pharmacy Program, a national program in which resources were developed for use by pharmacists with smokers.  The program was launched in a national broadcast with Robyn Richmond, Nick Zwar and two pharmacists as the expert panel.  In this initiative, more than 2500 pharmacists were trained around Australia.

Training medical practitioners in smoking cessation globally
Robyn Richmond has promoted global health by training doctors from other countries in smoking cessation treatments thus enabling them to adapt and implement the Smokescreen training program among doctors in their own countries.  This service to the international community has been recognised by numerous awards.

China
Robyn Richmond was invited by the Scientific Director of The Union (IUATLD), in 1995 to join a 10-day international delegation to work in China.  The Department of Health in Beijing invited the doctors to the training workshops and attended and participated in the workshops. Chinese doctors were introduced to the range of anti-smoking techniques available.  Various Smokescreen resources were translated into Mandarin, such as the book: Become a Non-Smoker, and the pamphlets for patients: Women and smoking: The choice is yours, Smokers, you have a right to know, Smoking: the choice is yours, Taking action to stop smoking and Self-help for smokers.
Additionally, as part of her WHO consultancy work in China in 1998, Robyn Richmond conducted workshops in smoking cessation methods for medical practitioners working in Beijing.
In 2007, Robyn Richmond was asked by the Commonwealth Department of Health and Ageing to run a training course in smoking cessation for doctors visiting Australia from various parts of China. She developed and ran a 10-day training course at UNSW. The participants were trained in the Smokescreen Education Program which they took back with them to train medical school clinicians and academics.

France
Following a training workshop Robyn Richmond ran for respiratory physicians at an IUALTD conference, the Director of the Department of Pulmonology at the Pitie-Salpetriere Hospital in Paris selected the Smokescreen program as the basis of his Nicomède program for dissemination among family doctors in France.  He translated and adapted the Smokescreen program and produced training resources. He combined the Smokescreen GP program with the Smokescreen Education program that Robyn Richmond had developed for medical students. He presented the combined programs to the French Ministry of Health and received their support and funding.  The French Ministry of Health launched the GP training program on 31 May 1999, World No Tobacco Day, which focused on smoking cessation.
During 1999-2000, one physician educator from each of the 125 administrative areas in France was educated and then they, in turn, trained 25 GPs in their areas.  Over the ensuing years, more than 10,000 physicians and nurses received education in the Nicomède Program.  The program was also introduced among 3000 French cardiologists, nurses in hospitals and physicians in the workplace, as well as into pregnancy units and 250 alcohol centres across France.
The Pitie-Salpetriere Hospital's evaluation was positive: “The French evolution of the Smokescreen program had in hand a lot of chance to be a success”.  During the first year, the Smokescreen Program was implemented in general practice, in alcohol centres, among occupational physicians, healthcare workers in hospitals, obstetric clinics and was used to educated medical students and nurses and became "very popular”.

Iran
An Iranian physician met Robyn Richmond when she was chair of the Tobacco Prevention Section of the IUATLD as he attended a training workshop in the Smokescreen program she was conducting.  He incorporated the training program into the continuing medical education programs for Iranian physicians.

Malaysia
The Smokescreen GP program materials were translated by a Malaysian physician when studying his Master of Public Health at the University of New South Wales under Robyn Richmond’s supervision. He returned to Malaysia with the program and actively trained GPs in the Malaysian Smokescreen program.

Japan
A Japanese endocrinologist was trained in the Smokescreen GP program when she came to Sydney for a sabbatical with Robyn Richmond. She translated the program and introduced it into Nara, Japan.

The workshop objectives were:

Critical to the success of this project is the ongoing support and mentorship, and evaluation of the effectiveness of implementation in medical and nursing schools within each of these four Asian countries.  An important outcome will be to develop guidelines from their experience implementing or strengthening a tobacco curriculum in their medical and nursing schools.

Please see article in the The Globe, the UNSW School of Public Health and Community Medicine's newsletter.