Professor Rose Amal is a UNSW Scientia Professor and was an ARC Laureate Fellow. Prof. Rose Amal is a chemical engineer and the leader of the Particles and Catalysis Research Group, and Co-Director of ARC Training Centre for the Global Hydrogen Economy (GlobH2E). Professor Rose Amal is recognised as a pioneer and leading authority in the fields of fine particle technology, photocatalysis and functional nanomaterials having made significant contributions to these related areas of research over the past 20 years. Her research contributions span from fundamental chemistry to applied chemical engineering fields; from material science and nano-research to a specialised photochemistry field. Her current research focuses on designing catalysts for solar and chemical energy conversion applications (including photocatalysis for water and air purification, water splitting, CO2 reduction to make Syngas and NOx reduction to generate ammonia)  and engineering systems for solar induced processes, using the sun’s energy as a clean fuel source.

Over the last 20 years, she has successfully attracted over $50M to UNSW from the Australian Research Council and industry partners (including an ARC Laureate Fellowship, ARC Centre of Excellence for Functional Nanomaterials, ARC Centre of Excellence for Carbon Science and Innovation, ARC Training Centre for the Global Hydrogen Economy),  Australian Renewable Energy Agency (ARENA), Australian Trailblazer Program, as well as grants from NSW government, such as as NSW Decarbonisation Innovation Hub.  She has published > 500 journal publications which have cumulatively received over 38,390 citations, resulting in an H-index of 102 (as of Jan 2023, Google scholar).

She has successfully supervised over 75 PhD students, 20 Masters students and more than 200 honours students in fields relating to environmental and energy technologies.

Professor Rose Amal has received numerous prestigious awards including James Cook Medal (2021), CHEMECA medalist (2021), named as 2019 NSW Scientist of the Year, being listed in the Australia's Top 100 Most Influential Engineers (2012-2015), the ExxonMobil Award (2012), the Judy Raper Women in Engineering Leadership Award (2012), the NSW Science and Engineering Award - Emerging Research  (2011),  and the Freehills Award (2008). She is a Fellow of Australian Academy of Technology and Engineering (FTSE), a Fellow of Australian Academy of Science (FAA), Fellow of Royal Society NSW (FRSN) Fellow of IChemE, and Honorary Fellow of Engineers Australia. She has received the nation’s top civilian honour – the Companion of the Order of Australia – as part of the 2018 Queen's Birthday Honours for her eminent service to chemical engineering, particularly in the field of particle technology, through seminal contributions to photocatalysis, to education as a researcher and academic, and to women in science as a role model and mentor.

To find out more or to follow the works of  Professor Rose Amal's research group, click: http://www.pcrg.unsw.edu.au

To read her publications, go to https://www.researchgate.net/profile/Rose_Amal

Utilising our geographically abundant solar energy and through designing novel photoelectrochemical and photocatalytic systems, the research provides an ultimately clean solution by efficiently harnessing and converting the solar energy to hydrogen while remediating wastewater.

In this project, we aim at producing clean hydrogen fuel from wastewater using sunlight-driven semiconducting materials. Simultaneously, the chemistry that occurs at the irradiated semiconductor will lead to the decomposition of organic substances which exist in the waste stream. The semiconductors are tailor…

Development and Modelling of Advanced Coagulation and Oxidation Processes

The proposed project aims to develop strategic and integrated approaches to address the impact of variability in water characteristics caused by climate change on Australian water treatment processes (WTPs).

The expected outcomes include: (i) Improved understanding of variability in water characteristics (and their impacts on WTPs) caused by climate change through advanced water analysis; (ii) Development of novel coagulants and energy efficient photocatalysis systems that lead to improved efficiency in water treatment; (iii) Strategic integration of these new developments into…

This project seeks to develop an integrated photocatalytic filtration unit for improving air quality in indoor environments, with an emphasis on aircraft cabins. The integrated unit will modify current aircraft filtration uunits such that they are capable of removing airborne contaminants while retaining their particle filtration properties.

The integrated unit will modify current aircraft filtration uunits such that they are capable of removing airborne contaminants while retaining their particle filtration properties. The technology will overcome crucial issues pertaining to…

The twin problems of limited fossil fuel resources and global warming caused by a surge of CO2 concentration in the atmosphere have triggered intensive research in innovative utilisation of CO2. The photocatalytic route for reducing CO2 to hydrocarbon fuels and/or valuable chemicals by solar energy is attracting great interest. However, this promising prospect is limited by the low quantum efficiency and selectivity of photocatalytic materials. This project will focus on the development of potent nano-catalysts to achieve a substantial yield and to exploit solar energy effectively. The…

The proposed project aims to develop multi-scale (from molecular, nano, to process scale) solution to reduce chloramine decay by integrating fundamental experimental science with advanced engineering. The work will generate fundamental knowledge base, which in turn, can be translated into frontier technologies for applications in long distance water distribution systems. It would improve water supply through multidisciplinary and practically implementable approaches. Specific outcomes include: (1) Comprehensive knowledge on chemical and bio- factors affecting chloramine decay (2) Coating…

Professor Rose Amal's lecture at the Shine Dome during the Australian Academy of Science gathering in May 2014. The lecture was on her research: Photocatalysis From Materials Design to System Engineering
Rose Amal - Sustainable Fuels from the Sun
NSW Science & Research Breakfast Seminar Series: Harnessing Solar Energy to Power Our Planet 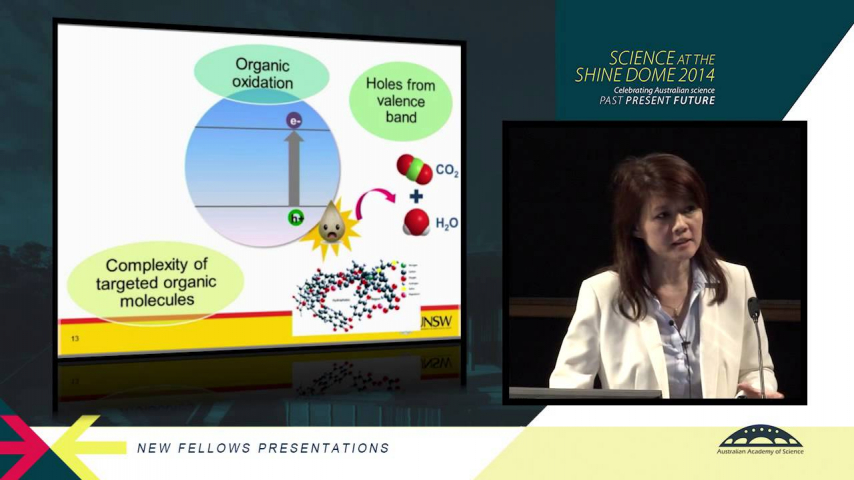 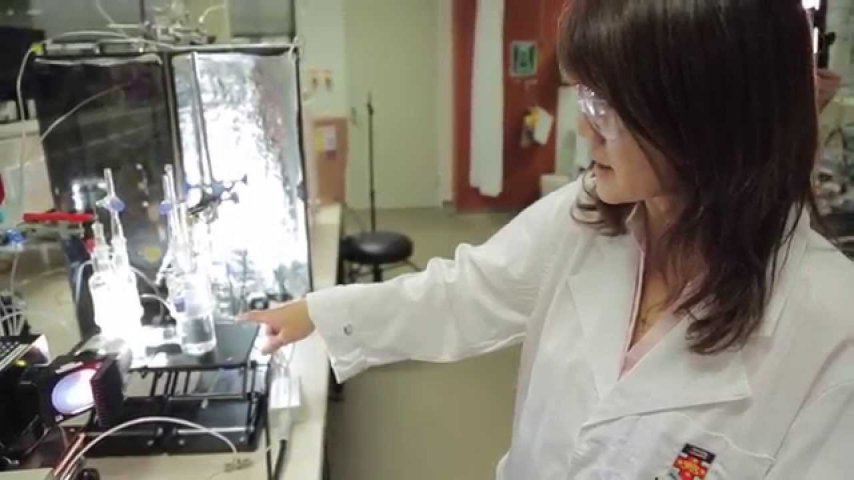 Rose Amal - Sustainable Fuels from the Sun
No video provider was found to handle the given URL. See the documentation for more information.
NSW Science & Research Breakfast Seminar Series: Harnessing Solar Energy to Power Our Planet